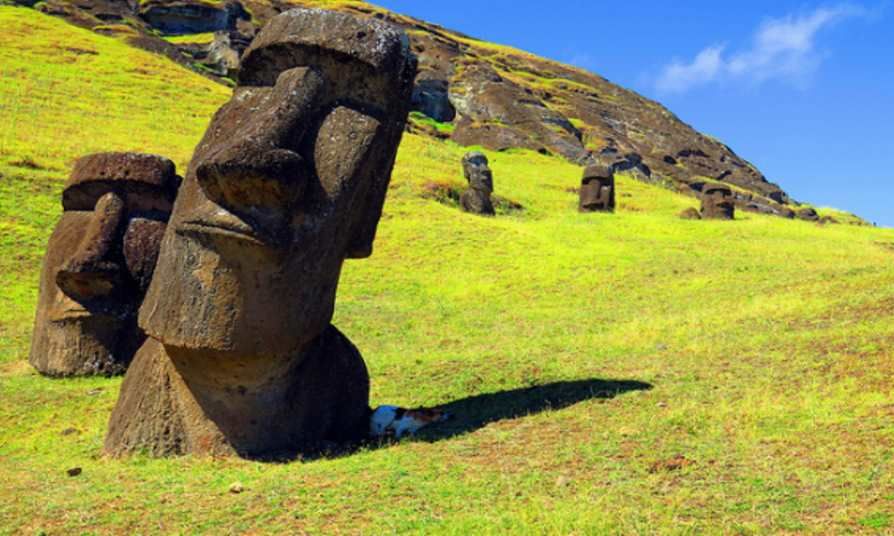 The history of Easter Island still hides many unknowns

The inhabitants of Easter Island, or Rapa Nui, created a unique culture and customs. Although scientists have been studying its history for many decades, it is still not agreed when it was settled or how to decipher the unique rongorongo script.

Easter Island, located in the Pacific Ocean, has an area similar to Katowice. It is one of the most isolated places on Earth – the nearest inhabited island in Polynesia is approx. 2000 km, and to the mainland – South America – about. 3600 km. It was discovered by a European in as late as 1722. on Easter Sunday, which is the source of the the origin of its present-day name.

– Today, there is no longer any doubt that people came to Easter Island from Polynesia. This fact is confirmed by genetic research,” says in an interview with PAP Dr. hab. Zuzanna Jakubowska-Vorbrich of the Institute of Studi in Iberian and Ibero-American Studies at the University of Warsaw. The researcher analyzes the texts of the first subr beetle in which ers reached Rapa Nui.

According to her, it was clear to 18th-century researchers that people came to Easter Island from Polynesia – it was obvious to them the similarities in the form of customary in, scratch in face, clothing or language. Only p Later, other concepts emerged, including those of Thor Heyerdahl, who ry claimed that one of the waves of sedimentation got there from South America. To convince the public of this idea, he even conducted an experiment involving sailing a traditional raft from the coast of South America to the islands of Polynesia.

– It is now believed that people came to the island in one wave of settlement probably from the island of Mangarewa, they may also have had ties to Pitcairn, the expert adds. However, the motivation of the sailors remains a mystery. Perhaps it was a desire to conquer new territory in, or perhaps overpopulation? – speculates Dr. hab. Jakubowska-Vorbrich.

It was long thought to have occurred as much as 1,500 years ago, as radiocarbon dating would indicate. Nowadays, some researchers believe that they have become contaminated, hence the wrong result was obtained. – Polynesians came ashore in the island probably between the 10th and 13th centuries. – m i researcher. He also noted that it was not at all the farthest to the east of the island d place, to which rego they arrived.

– Certainly, individual boats must also have reached the American continent and returned to Polynesia. This is evidenced by the yams and calabashes common in Oceania, which re come from this very continent,” notes the researcher. Americans, on the other hand, owe the Polynesians chickens – animals of Asian provenance.

However, the unique rongorongo writing remains a mystery. Other Polynesian peoples did not have their own writing system. So why did it appear on one of the world’s most stranded islands? Science has yet to find an answer to this question.

To our time 25 monuments have survived in , on which rongorongo texts are found here. The sentences were read in the reverse system conego bustrofedon – it was necessary to rotate the object while reading the. According to the researcher, the writing was known to the island’s elite. Unfortunately, after the arrival of the European In its knowledge quickly went into oblivion – in the 19th century. slave traders ventured to the island , which The aborigines kidnapped a large part of the In the island including its chief.

Fortunately, the surviving accounts of m ished about the significance and function of the moai – or monumental stone statues in, showing silhouettes of people with large heads down to their hips. They became a symbol of the island because of their j very distinctive appearance. As the researcher points out, They vary in size – some re weighing several, and the largest several tens of tons. According to estimates in the researchers carved about a thousand pieces of.

– As for these estimates should be careful, because the islanders buried some of the moai – It is not clear to us why this happened,” the researcher points out. As he explains, these were images of the protoplast – translated from rapanui language they were "living faces of ancestors ”, to kt ho prayed. It was believed that over time the ancestors moved further and further into the afterlife.

As Jakubowska-Vorbrich recounts, this is why after kt ryme of successive generations a new statue was forged – in this way b was created the image of an ancestor closer to the living. Elderly were sometimes used as building blocks for platforms, on which they rych was placed another. Among d statue are dominated by depictions of men, but there are also women.

– Several hundred years ago, the view that appeared to the islanders must have been quite different from today – first of all, at the time the statue was placed, the stone had a clear ż ³to-orange color. Eyes of the statue – put on during ceremonies – was made of white coral, with a pupil of obsidian – black volcanic glass. In turn, the platforms, on which some placed them, they were parked on the edges draped with red stone. Now the statues and platforms are simply gray, says the researcher, who He is currently preparing a book on color perception by the inhabitants of Rapa Nui and the first Europeans in Rapa Nui and the first Europeans , kt ho came to the island.

She points out that color certainly played an important role among the d inhabitants islands. For example, only those who came from the elite could wear dyed clothes. Detailed lion was highly valued for its red and yellow color The green and blue colors were not known or used at all.

Scientists are still arguing how the b transported statues from the quarry. According to some, highly prized (as they became increasingly rare on Rapa Nui) trees were used as rollers. According to others, they were dragged on ropes, vertically. This was to be helped by stone roads, which They were supposed to level depressions and elevations on the island, making transportation easier. The first version is called into question due to the fact that the island’s main trees grew nie palm trees, kt The first version is questionable due to the fact that on the island grew mainly trees that could withstand the pressure of many tons of.

– According to one legend, the statues were supposed to walk. And this is all thanks to "mana" – which can be translated as magical power, authority, but also knowledge. It seems that the statues "went" simply due to science – had the knowledge, which ra allowed to shift the burden,” according to Jakubowska-Vorbrich.

Rapa Nui was inhabited by one tribe, on which the re consisted of 10-11 clans. They each had their own platform for erecting statues – the researcher emphasizes that they were placed only on the coast, but the faces of the statues were always directed towards the interior of the island. – After all, it was its inhabitants were to protect and support – mark.

Authority over the island was held hereditarily by representatives of only one clan. On the other hand, sposr d of all were elected przyw dca spiritual – However, this feature most likely appeared p ź later in the history of the island. Each of the candidate indicated the competitor who ry took part in a special competition on his behalf. It consisted of finding a black tern egg as soon as possible on a neighboring islet.

– Selected in this way b bring The spiritual father took care of the island in this way b lny, because his "cadence" spent in seclusion – in a cave or hut, where no m head talk to no one pr cz helper, wash themselves or cut their nails,” says Jakubowska-Vorbrich. Local residents stayed to him with their requests, which re were to fulfill their spiritual leader’s. In the opinion of some rych researchers m It could be considered an earthly incarnation of one of the gods .

Popular reports sometimes state that at the time of the arrival of the European to the island the state of its environment was deplorable, and local residents were starving to death.

– Such a picture is not true. We do not have any evidence In the famine of the period. On the contrary, thanks to research in recent years, we have learned that agriculture on Easter Island stood at a very high level, and children were breastfed until 3. year of life,” the expert argues. In her opinion, the real catastrophe occurred on Easter Island only in the 19th w., when slave hunters arrived there .

– It was the end for the social structure, which ra existed on the island for several hundred years. The void was filled by missionaries – today the people of Rapa Nui are Christian, although some of the ancient beliefs have survived, the researcher said.